The Divine State
In Shinto, human beings are believed to be born pure, with a gentle and clear disposition. To be pure is to approach godliness; indeed it is to become one with the state of the divine. It is Shinto’s prayer, Shinto’s heart, to return to that original human state, and live a daily life which is at one with the kami, indigenous folk deities of Japan.Practices and Rituals
Central to the Shinto tradition is the concept of purity. There are daily traditional Shinto practices and rituals and many that happen at various shrines across Japan.

One of the main practices of Shinto faith is “omairi” which means venerable participation, done best by visiting Shinto shrines throughout Japan. When visiting a shrine, one must bow respectfully before entering, then show respect by cleaning oneself with water at one of many handwashing stations.

Many of the Shinto rituals are to keep away the evil spirits. Misogi Hari is a daily ritual performed at the shrines. It involves purifying oneself by ritual use of water while reciting prayers. 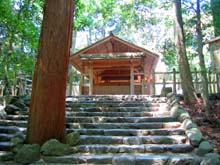 Early Japanese myths emphasize harmony with nature and maintaining the balance between the human and natural world. The most popular deity in Japan is the Goddess Amaterasu, the Sun Goddess. She is protector of Japan and is worshiped at Ise (above), the most important shrine in Japan. From her are descended all the gods, the emperor and the Japanese people.

“A single sincere prayer moves heaven.
You will surely realize the divine presence of heaven through a sincere prayer.”
– Shinto Wisdom

Input if available.  Otherwise “Not Applicable”

Shinto, an indigenous religion of Japan, is practiced by nearly 80% of the population of Japan. It is defined as an action-centered religion, focused on ritual practices to be carried out diligently.

The word “Shinto” combines two terms – shin, meaning “spirit” (kami) and “to“, meaning a philosophical path or study (from the Chinese word dào).

Kami refers to the divinity, or sacred essence, that manifests in multiple forms: rocks, trees, rivers, animals, places, and even people can be said to possess the nature of kami. Kami and people are not separate; they exist within the same world and share its interrelated complexity.

Most of the Japanese attend Shinto shrines and beseech “kami“ without belonging to an institutional “Shinto” religion. The beliefs are not focused on absolute right or wrong. Shintoists acknowledge that nobody is perfect. They view humans as fundamentally good, with the evils of the world caused by troublesome spirits (kami).

It provides a connection between present-day Japan and its ancient past. The customs and values of Shinto are inseparable from those of Japanese culture.

One important aspect of Shintoism is purity. Shintos believe that all humans are born pure and that humans collect “badness” over time. The human can get rid of the impurity in their life through purifying rituals. The most common purifying agents are water and salt.

Misogi Hari is a daily ritual performed at the shrines. It involves purifying oneself by ritual use of water while reciting prayers. When visiting a shrine, one must bow respectfully before entering, then show respect by cleaning oneself with water at one of many hand washing stations.

Shinto shrines are regarded as the spiritual home of the Japanese. They are dedicated to the kami. A Shintu shrines is usually within a sacred grove, as reverence for Nature forms an important part of the Shinto tradition. The shrine is approached through a gateway called a torii, signifying entrance to a sacred space. Festivals to honor the folk deities, called ‘matsuri’, take place at the shrines, involving young and old.

Weddings: The traditional Shinto wedding ceremony is a private, formal event, usually attended by the immediate family and closest friends of the couple. The ceremony symbolizes both the union of two people and the joining of two families.

In the traditional “san san kudo” or “three times three” ceremony, the couple exchange cups of sake. Similar cups of sake are exchanged between members of the families to signify the union. Following these exchanges, the couple offer twigs of the “Sakaki” sacred tree in worship to the gods.

Sharing Happiness (Hindu tradition) Thousands of candles can be lit from a single candle, and the life of the candle will not be shortened. Happiness never decreases by being shared. - Sutta Nipata
Read More

The Christmas Story is one of love, joy, giving; the rebirth of innocence; and hope for harmony among us all. I bring you good news of great joy which shall be for all people...Glory to God in the highest and on earth peace, goodwill to all men. Luke 2:
Read More

Interconnected "The life of all creatures and our own lives are One; profoundly dependent upon each other.... We call our ancient scroll of wisdom, the Torah, a 'tree of life', for it, like Earth's great forests sustains us. Torah teaches that creation, in its great...
Read More

Life and Death are One

Life and Death are One For what is it to die but to stand naked in the wind and to melt into the sun? And what is it to cease breathing, but to free the breath from its restless tides, that it may rise and expand and seek God unencumbered? Only when you drink from the...
Read More

A Healing Prayer and Water It is based on Ho'Oponopono, the ancient religion of Hawaii, which knew that we are all united as ONE on a higher level.. The ancient Hawaiians believed that saying and meaning special words of love and forgiveness would help put us and...
Read More

My Place in the Universe

My Place in the Universe The Ocean I see and sail is my brother. The Wind is my sister. It brings hope. It is fresh and new. The Sky is my father and mother and the creators. It is very great. The Earth is my ancestors and the past. I thank the past and look ahead. I...
Read More

Our Spirit May Wander and Come Back

The Symbol of the Angel in World Religions

Belief in angels is not limited to Christian traditions. The Christians inherited Jewish understandings of angels, which in turn may have been partly inherited from the Egyptians. Angels to Christians represented the spirit of love and messengers of the Spirit of God...
Read More

Diwali - Festival of Lights Diwali is India's biggest and most important holiday of the year. The festival gets its name from the row (avali) of clay lamps (or deepa) that Indians light outside their homes to symbolize the inner light that protects us from spiritual...
Read More

Dietary Practice, Arranged Marriages Among high-class Hindus, there exists a strong tradition of vegetarianism, a dietary practiceassociated with ritual purity. The higher one's caste, the greater the number of rules required to maintain a state of ritual purity....
Read More