The Symbol of the Angel in World Religions 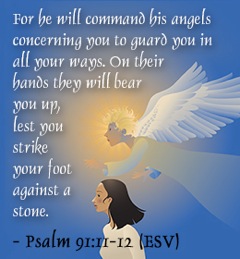 Belief in angels is not limited to Christian traditions. The Christians inherited Jewish understandings of angels, which in turn may have been partly inherited from the Egyptians. Angels to Christians represented the spirit of love and messengers of the Spirit of God in Jesus the Christ

The angels are represented throughout the Christian Bible as a body of spiritual beings intermediate between God and men: “You have made him (man) a little less than the angels …” (Psalms 8:4-5). Some Christians believe that angels are created beings, and use the following passage as evidence: “praise ye Him, all His angels: praise ye Him, all His hosts … for He spoke and they were made. He commanded and they were created …” (Psalms 148:2-5; Colossians 1:16). The Fourth Lateran Council (1215) declared that the angels were created beings. The Council’s decree Firmiter credimus (issued against the Albigenses) declared both that angels were created and that men were created after them. The First Vatican Council (1869) repeated this declaration in Dei Filius, the “Dogmatic constitution on the Catholic faith”. Of note is that the Bible describes the function of angels as “messengers” and does not indicate when the creation of angels occurred.

Adherents of The Church of Jesus Christ of Latter-day Saints (generally referred to as “Mormons”) view angels as the messengers of God. They are sent to mankind to deliver messages, minister to humanity, teach doctrines of salvation, call mankind to repentance, give priesthood keys, save individuals in perilous times, and guide humankind. –Wikipedia

10 References to Angels in the Bible

Psalm 91:11
For he will command his angels concerning you to guard you in all your ways.

Matthew 18:10
“See that you do not despise one of these little ones. For I tell you that in heaven their angels always see the face of my Father
who is in heaven.

Hebrews 13:2
Do not neglect to show hospitality to strangers, for thereby
some have entertained angels unawares.

Hebrews 1:14
Are they not all ministering spirits
sent out to serve for the sake of those
who are to inherit salvation?

Matthew 4:11
Then the devil left him, and behold,
angels came and were ministering to him.
Revelation 5:11 ESV
Then I looked, and I heard around the throne and the living creatures and the elders
the voice of many angels, numbering myriads of myriads and thousands of thousands,

Revelation 14:6 ESV
Then I saw another angel flying directly overhead, with an eternal gospel to proclaim to those who dwell on earth, to every nation and tribe and language and people.

Matthew 26:53
Do you think that I cannot appeal to my Father, and he will at once send me more than twelve legions of angels?

Genesis 1:3
And God said, “Let there be light,”
and there was light.

Job 33: 23
“If a man has an angel to whom one would listen once in a thousand times,
the angel would show him the way of uprightness.