Beliefs: What Taoists Believe
The goal of everyone is to become one with the Tao. Taoists believe that people are by nature, good, and that one should be kind to others simply because such treatment will probably be reciprocated.
Qi or Chi is the vital energy of the Universe from which the world was created. It exists in all living things. The source of chi has a cosmic origin and is elusive and mysterious, but its manifestations are real and can be practically applied in such Taoist disciplines as Qigong and martial arts. The purpose of Taoism is to release the confusion of society and bring individuals closer to Nature (the natural flow).

Principles of Taoism
The principles of Taoism are based on the ancient polarities of Yin &Yang and Wu Wei. This pair of complementary opposites creates the flow of nature. Yin is the negative balance, and has qualities such as femininity, mystery, relaxation, etc. Yang is the positive balance and has qualities such as masculinity, heat, aggressiveness, etc. These forces are always at work together; they keep the universe vital and alive. They are the agents that actually produce the mysterious flow of life.

Historical Perspective
Many names describe the Tao or Dao, the Great Principle or The Way; it eludes  intellectual description because it deals with the big, big picture of life and energy.

Lao Tzu was the author of the Chinese book of wisdom, the Tao Te Ching. He and the Tao Te Ching are intimately involved with the philosophy and religion of Taoism. The book, which was dictated to a man named Yin Xi in the 6th Century B.C., is an ancient text that is the expression of the Tao, dealing with the origins of life, energy, human nature, society and relationships.

The influence of the Tao on human culture, medicine, and spiritual beliefs is extensive over the last 3,000 years. Perhaps like the Tao itself, Lao Tzu’s influence is as understated as it is pervasive in our lives up to the present day. Lao Tzu is said to have influenced Confucius and other Chinese philosophers as well as Zen Buddhists (the branch of Buddhism that originated in China).

Taoism is linked to shamanism, the development of traditional Chinese medicine (TCM) and to the moving meditations of Qigong and tai chi. In Taoist lore, long before Lao Tzu, (2700 B.C., Huang Ti (the Yellow Emperor) created the longevity practices which became Qigong and began the development of Taoist ways of living. The book Yellow Emperor’s Classic of Medicine is the first written account of the concept of Qi (chi) or life force energy. With the rise of holistic medicine, meditation, Qigong and tai chi in the Western world, Taoist principles and practices are widely experienced and embraced in the present day.

Input if available.  Otherwise “Not Applicable” 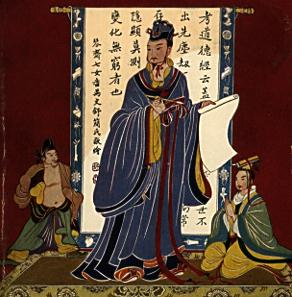 The term Tao means “way”, “path” or “principle”, and is found in Chinese philosophies and religions other than Taoism. In Taoism, however, Tao denotes something that is both the source and the driving force behind everything that exists. The Tao represents the essence of all creation, and the spiritual tradition emphasizes living in harmony.

Taoism idealizes a natural world characterized by ever-changing cyclical correspondence between the “inner” (microcosm) and the outer (macrocosm). All life energy (“chi”) is composed of differing combinations of female yin energy and male yang energy, for balance.

The founder of Taoism is considered to be Lao Tzu (Laozi) who lived in the 500s BCE, and introduced the elements of Taoism through his book Tao Te Ching.

Many scholars believe Taoism arose as a counter-movement to Confucianism. The basic spiritual philosophies are much the same and Lao Tzu is traditionally held to have been a teacher of Confucius. Taoism favors natural approach vs. ritual, spontaneity, and individualism vs. a defined social order. Representatives of early Chinese Buddhism were deeply influenced by the Taoist keystone texts which embrace “this life” and “living every moment.”

The practices of Taoism evolved over time, developing through a number of different schools. Taoists recognize five basic elements (wu-hsing) of wood, fire, earth, metal and water. Practitioners focus on benevolence, and inner peace. One goal is to seek spiritual enlightenment through action without effort (wu-wei).

Throughout Chinese history, Taoism was nominated as the state religion several times until the 17th century, when it fell from favor. Although suppressed in the first decades of the People’s Republic of China (PRC), and enduring persecution during the Cultural Revolution, Taoism is one of five religions recognized in the PRC today.

Estimates for the number of Taoists worldwide range from 20 million to possibly as many as 400 million in China alone, especially in regions populated by Chinese people like mainland China, Taiwan, Malaysia, Philippines, and Singapore.

Symbols: The taijitu (yin and yang symbol) as well as the Ba Gua (Eight Trigrams of Feng Shui) are associated with Taoist symbolism. Originating around the 10th century, the Taijutu is used by almost all Taoist organizations on their flags, logos, temple floors, or stitched into clerical robes. Taoist temples may fly square or triangular flags that feature mystical writing or diagrams intended to provide guidance for the spirits of the dead, to bring good fortune, increase the life span, etc.

Exercises: A recurrent and important element of Taoism are rituals, exercises and substances aiming at aligning oneself spiritually with cosmic forces, at undertaking ecstatic spiritual journeys, or at improving physical health and thereby extending one’s life, ideally to the point of immortality. Enlightened and immortal beings are referred to as xian.

Martial Arts: A number of martial arts traditions, (like T’ai Chi Ch’uan) embody Taoist principles to a significant extent, and some practitioners consider their art to be a means of practicing Taoism.

Other Spiritual Practices: Fortune telling – including astrology, I Ching, and other forms of divination – have long been considered a traditional Taoist pursuits. Mediumship is widely encountered in some sects (tongji or marial form and spirit-writing).

Recurrent and important elements of Taoism are rituals, exercises and substances aiming at aligning oneself spiritually with cosmic forces, at undertaking spiritual journeys, or at improving physical health and thereby extending one’s life, ideally to the point of immortality. Enlightened and immortal beings are referred to as xian.

Non-physical beings
According to Taoist belief, the world is full of non-physical beings or spirits who need to obtain energy (feed) to survive. Some of these spirits must get their energy from humans. Taoist Diagrams are used to protect individuals’ health, well-being, homes and relationships from the influence of certain non-physical beings. Diagrams are brush strokes conforming to specific configurations that modify a person’s aura.

Taoist Practices
Individuals create a link to the source of Qi or the Great Ultimate by using images of the Gods and the Spirits in meditation and ceremonies. These connections bring persons closer to the Great Ultimate to help them clarify and straighten their path in life.
The effect of this connection makes an individual mentally stronger, less confused and able to rectify mistakes of the past with a clear understand if the Reality of life. The stronger the connection between the individual and the Great Ultimate, this Absolute Reality, the clearer is the picture of the world and the person’s place in it.

Tao Quotes***
What we mean by Tao is the way or course of Nature. This way has nothing good or bad, it is a mere flowing of things following the development and decline attributes of the moment. (From Jhian Yang: A Short Introductory Lesson to Tao and Taoism)
***
Reading the Tao Te Ching and other Taoist texts felt like “someone was looking over my shoulder,” explaining to me things that really had relevance to my life. The most appealing aspect of Taoism, though, was that it didn’t claim to be “divinely-inspired.” Laozi never claimed to have been visited by a deity and commanded to write the Tao Te Ching. He wrote it because he observed patterns in the world around him — patterns that didn’t require blind faith and acceptance of logical contradiction to recognize — and realized that everything must be connected somehow.   (From: www.westernreformtaoism.org/introduction.php )

The symbol of Taoism is called the ‘Tai Ji’ which means the ‘great ultimate’. It is represented by a circle which is divided into two parts. The dark side is called Yin while the dark side is called Yang. The small circles suggest that each half has a ‘seed’ of the other half. To Taoists, Yin and Yang are not opposites. In fact, each must exist with the other and cannot exist without the presence of the other. The impact of human civilization is believed to upset the balance of Yin and Yang.

Wu Wei means “non-action” and is the practice of doing nothing to accomplish everything. Someone who understands and adheres to Wu Wei does not try to force things. The way can only be found in humility, in serene acceptance of life and things as they are, and in finding the flow of nature, rather than trying to produce and form people and situations to your own desires.

The Tao Te Ching illustrates: The more laws you make, the more thieves there will be. (Chapter 57)

The sage does not boast, therefore is given credit. (Chapter 22)

He who acts harms, he who grabs lets slip. (Chapter 64)