Oneness: one is the many and The many is the one. God does not dwell in the heavens.

Buddha means the “Awakened” or “Enlightened One”.  It was the name given to Siddhartha Gautama, the founder of Buddhism.  The majority of Buddhists believe that there have been, and will be in the future, many other Buddhas.  Some even claim that Jesus Christ was a Buddha.

Participate in the following Walking meditation:

Take a moment to center yourself, tune into your breathing.  Notice where you are.  Take a moment to discern which direction you would like to move in.  Observe around you and pick a target as your final destination.  Observe your balance on your feet, is your weight physically equally on both feet.  Now choose a foot to lift and take your first step.  Notice how it feels to be moving in a direction that you choose.  Take a moment and have one foot out in front before you; bring up the other foot to join the first.  How does it feel to be in the past and the present at the same time?  There is no right or wrong answer, just how you feel with your actions and decisions.  Now take the next step.  With deliberate action, step by step, move toward your target.  Notice your breathing; did you stop your breathing? Now imagine that there is some obstacle to your goal; you have to move around the object.  Which way do you choose to move toward your goal? How does it feel? Having cleared the object, adjust your direction and move now rapidly toward your goal.  How goes it feel to move toward your target without hampering?  You have now reached your goal destination.  Tune into the sense of accomplishment.  Tune into how it feels to reach your goal. Regroup your total experience.  Share with a partner or group what you learned from your participation in this exercise and also what your highlight was in participating in the exercise.

The Tripitaka (Pali Canon), Mahayana Sutras and the Tibetan Book of the Dead are three major noncanonical Buddhist texts.

Worldwide but mostly in Asia.

Buddha means the “Awakened” or “Enlightened One”.  It was the name given to Siddhartha Gautama, the founder of Buddhism.  The majority of Buddhists believe that there have been, and will be in the future, many other Buddhas.  Some even claim that Jesus Christ was a Buddha. 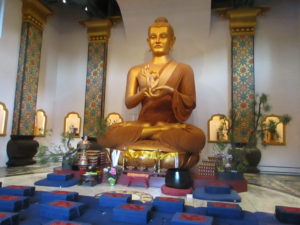 Buddhism has spread to many parts of the world.  Nevertheless, during the twentieth century it has been subjected to great suppression by the Chinese, more than at any other time in its history. Today, it is estimated that between one-third and one-fifth of the people on earth follow some aspect of this many-aspected religious philosophy and their number is steadily increasing, not only in Asian countries like India but also in modern Europe and America.

Many modern Westerners now study and practice Zen; others have formed communities under the guidance of exiled Tibetans or have taken instruction in Theravada Buddhism with teachers from Burma, Sri Lanka or Thailand. In Hawaii, America’s newest state, Buddhism is the major religious denomination.  During its long centuries of quiet pilgrimage by the land and sea, much of Buddhism’s powerful influence may have had its source in the deliberate avoidance of claims to exclusive truth, adherence to inflexible dogma, or the authority of any final, sacrosanct, theocratic hierarchy.

The “Come and see for yourself” attitude of the original Great Teacher, Siddhartha Gautama, who became the Buddha, tended to lower the resistance that so often attends the arrival of a new and unfamiliar faith. This has lead to its great popularity.

Mani Wheel: Tibetan prayer wheels (called Mani wheels by the Tibetans) are devices for spreading spiritual blessings and well being.

The story of Buddha is the life story of Siddhartha Gautama. He was born in a household of many riches and privilege.  Only after he married and wandered outside the holdings of his parents did he observe the suffering in the world.  He became interested in working with the masses and at age 29 decided to give up being a prince and became the wandering ascetic.  This is called the Great Renunciation.

One day Siddhartha went to meditate beneath a papal tree, now known as a bodhi tree.  He went into trance and the four noble truths came to him.  Following his enlightenment, the Buddha gathered five of his companions and delivered his first sermon.  He preached that those searching for enlightenment should not look to find the two extremes of self-indulgence and self-mortification, but should also avoid them.  He taught instead that they should discover the middle path that leads to vision, to knowledge, to calmness, to awakening and to nirvana. Nirvana is the aim of a Buddhist’s religious practice.  It is said to be ridding oneself from the delusion of ego, freeing oneself from the claims of the mundane world. Buddha taught the concept of no self.

All particular things surrounding us come from one ultimate source, which is all-powerful, all-knowing, and all-loving. The world is the expression or manifestation of this source.

Oneness: one is the many and The many is the one. God does not dwell in the heavens.

Buddhists keep on removing selfishness and seeking the lights that is everywhere, practicing loving kindness.

Worship and Traditions of Budhism Followers of Buddhism have a number of practices.  One of the most popular is veneration of the Buddha. The devotions are carried out in a shrine room, and most Buddhists have a shrine room in their homes.  In addition, meditation and...
Read More